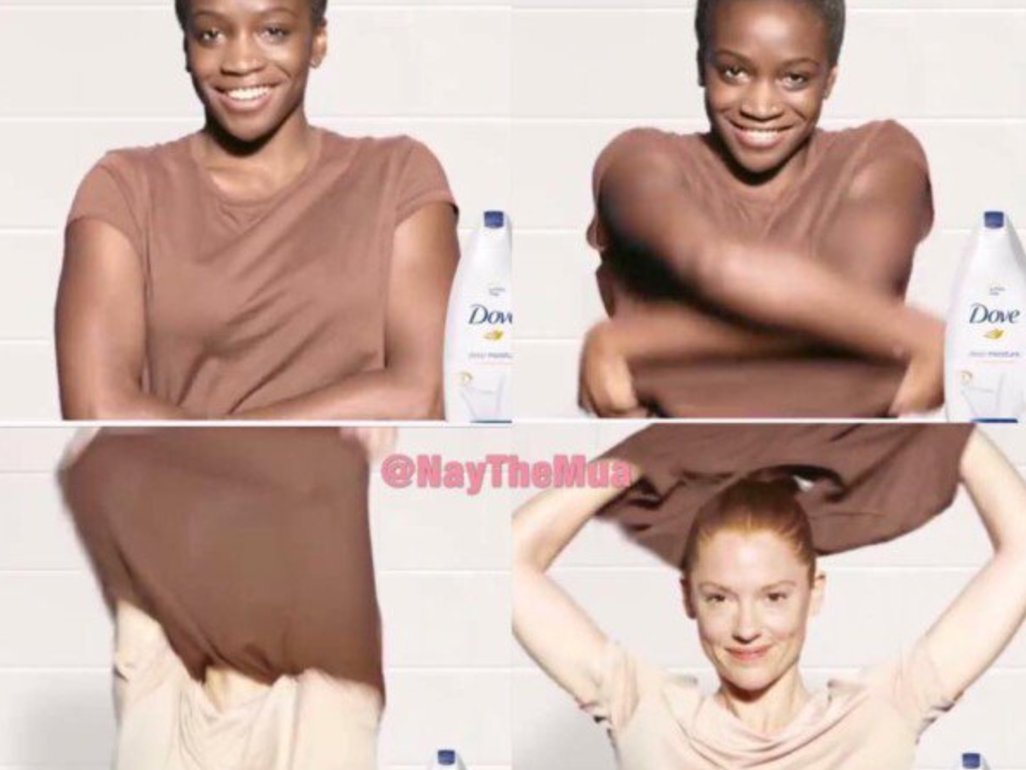 *Dove is hardly the first marketer to find itself embroiled in a public-relations crisis this year,

but it's likely to take a bigger hit than others, experts say.

with its "Real Beauty" campaign.

social media, where a consumer mob can quickly jump on a misstep and cause it to escalate far

beyond the brand's control.

Dove is the latest marketer to find itself in hot water after it ran what many saw as a racist ad on Facebook last week.

The beauty brand posted a three-second video on its US Facebook page on Friday showing a black woman removing her top to reveal a smiling white woman underneath. On Saturday, the brand apologized and said in a tweet that it had removed the clip.

While Unilever, which owns the Dove brand, is hardly the first to find itself embroiled in a public-relations crisis this year, experts say it's likely to take a bigger hit than others, like Pepsi, which was hammered earlier this year for an ad starring Kendall Jenner.

That's because the Dove ad isn't just tone-deaf — more problematic is that its message seems to stands staunchly against everything that the company's much-praised, pro-women marketing has stood for over the past decade. Its uber-successful 13-year-old "Real Beauty" campaign has featured messaging such as "You're more beautiful than you think."

"The Pepsi mishap seems small compared to this ad by Dove and Unilever," said Chris Allieri, the principal of Mulberry & Astor, a New York-based PR, branding, and marketing agency. "For a company that has professed to embrace 'real beauty' by showcasing everyday women, this misstep is unconscionable."

With this unforced error, the company has unraveled the entire premise of its "Real Beauty" campaign, said Erich Joachimsthaler, the founder and CEO of the branding-strategy firm Vivaldi Partners. Those ads have long centered on rejecting insular notions of beauty while vowing to feature "real women of different ages, sizes, ethnicities, hair color, type or style."

"Dove's brand has been built on this unique and well-communicated belief system," he said. "And this ad undermines the very brand value for which Dove stands."

Not only has Dove built its brand on "Real Beauty," but Unilever too has embraced a role as a champion of diversity in the advertising and marketing industry.

Unilever is at the forefront of an industry group called the Unstereotype Alliance, tasked with proactively coming up with ways to make ads less stereotypical. The group, launched to much fanfare at the Cannes Lions festival this summer, was lauded by Unilever's marketing chief, Keith Weed, during his panels at Advertising Week two weeks ago.

"When your ad is being called 'racist' by people across social media, you've done a lot more than 'miss the mark,'" Allieri said. "It just goes to show that in reality there is a long way from Cannes to Main Street. Maybe they should have 'real people' create the ads rather than just starring in them."

This isn't the first time Dove has caused outrage — many people see the ad as just the latest in a string of marketing efforts from Dove that elevate white beauty above that of women of color.

In 2011, for example, Dove apologized for an ad for its VisibleCare body wash that seemed to show a black woman in the "before" photo and a white woman in the "after" photo with "more beautiful skin." And in 2012, Dove faced criticism for advertising its Summer Glow Lotion as being for "normal to dark skin."

"This would be a crisis of extreme proportions even if it was a one-off," said Matt Rizzetta, the CEO of the brand-communications agency North 6th Agency. "But it's not the first time that it's happened to them, and that's why lands them a place alongside the biggest brand crises of the year, including United and Uber."

Dove's widely derided ad also once again highlights the delicate place that brands occupy in the age of social media, where a consumer mob can quickly jump on any perceived slight and cause it to escalate far beyond the brand's control. Like Uber and United Airlines earlier this year, Dove has lost control of its narrative and consumers have called for a boycott, using the hashtag #BoycottDove.

"I don't question their intent, but I do question their approval process, their execution, and general common sense," Rizzetta said. "While social media requires a faster turnaround and a shorter response time, there need to be ample checks and balances to ensure that the sensitivity of the message is at par with speed and response time."

Dove told Business Insider the short video was intended to convey that Dove body wash was for every woman, as well as celebrate diversity, "but we got it wrong." The brand also said the video "did not represent the diversity of real beauty, which is something Dove is passionate about and is core to our beliefs," and that it was "re-evaluating our internal processes for creating and approving content to prevent us making this type of mistake in future."

Experts said the brand must not only put an efficient crisis-communications plan in place, but walk the walk.

"Launching an Unstereotype Alliance at an advertising party with lots of rosé at the beach or fancy yacht events at Cannes is just a lot of talk," Joachimsthaler said. "They need to walk the talk."